In 1998, following a lifetime dedicated to the Martial Arts, Fred Evrard founded Kali Majapahit (KM), a holistic Filipino Martial Arts system. The first two KM schools were opened in Tahiti and Moorea (French Polynesia). In 2006, after a 4-year trip around the world for further studying martial arts and traditional medicines, Fred and his wife Lila, opened their 3rd KM school in Singapore. Today, KM is represented in Singapore (Headquarters), Indonesia, Japan, India, Tahiti, France, Germany, Finland, Switzerland, the Philippines, the Netherlands and the US.

The philosophy behind Kali Majapahit is that Martial Arts training is not only about physical skills, focus and self-confidence, but also about reaching challenging goals, and building up our health and energy level. Every class will emphasize 3 aspects of the Art: Self-defense & Martial Arts, Health (including nutrition, posture correction, breathing, etc.), and Personal Growth. A comprehensive rotating curriculum makes our very efficient and unique Martial Art system accessible to anyone. KM also has a specific law enforcement program and is used by special forces and elite units around the world.

Our Mission is to positively impact the world and the life of others through our teaching and philosophy. We strive to be our very best in teaching martial arts, developing leadership skills in others, teaching personal development skills, a healthy lifestyle, ethics and moral. We lead by example.

Kali Majapahit (KM) is a Filipino Martial Arts system with elements of Indonesian Pencak Silat, Muay Thai, Western Boxing and Bruce Lee’s Jeet Kune Do. KM was founded in Tahiti in 1998 and opened its current headquarters in Singapore in 2006. We now run programs for adults and children as well as special programs for private organizations, government and law enforcement agencies, all around the world.

Our Founder, Punong Guro Fred Evrard has been a martial artist for 42 years, teaching them for 30 years, and owns 14 Black Belts and Instructor certificates. Fred is also a CQC (Close Quarter Combat) instructor for different Law Enforcement Agencies all over the world, a former Red Beret (Paratrooper) in the French Army and a knife-defense and counter-terrorism consultant for the French Ministry of Defense.

Our training curriculum was designed to give students tools, not only for being the best possible martial artist, but also for living a better and healthier life; to provide them with great values, focus and energy; and finally to boost up their life with positivism, perseverance and confidence.

Kali Majapahit was created based on Punong Guro Fred Evrard’s extensive exposure to various martial arts, which he combined and borrowed the most effective concepts as a base for our system. It later evolved to build its own identity and concepts. Here are the sub-systems you are going to learn in our academies:

Our curriculum is built in such way that it is easy for students to learn and progress. At the end of every 3-month cycles, students, (adults and children alike), undergo testing and graduation to validate what was learned. Step by step, one belt at a time, students complete Beginners, Intermediates, Advanced and Experts curriculum to reach Black Belt level (when the journey really starts). This journey never ends and each level was designed with specific expectations. Beyond martial arts, it is a life journey that students take with the assistance of their instructors. 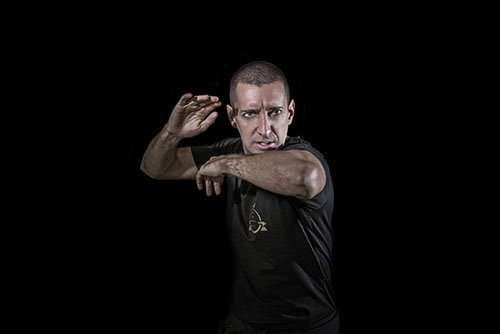 Fred Evrard is a professional martial arts instructor and international consultant in self-defense and counter-terrorism.

Fred was born in Paris, France in 1972 and started training in Martial Arts (Judo) at the age of 6. In 1998, following a lifetime dedicated to the Martial Arts and with the blessing of his masters, he founded his own style of martial arts, Kali Majapahit. In 2003, Fred and his wife Lila left their home in Tahiti for a 4-year-martial-arts-journey around the world. 4 years without going home, training all over the world with masters of different martial arts and doctors of traditional medicines.

In 2006, Fred and Lila opened the KM Headquarters in Singapore, and now have branches all over the world. Kali Majapahit is a synthesis of several Southeast Asian martial arts (Filipino, Indonesian and Thai), Western Boxing and Bruce Lee’s Jeet Kune Do. Fred has been studying Martial Arts for more than 42 years and teaching them for 30 years.

Fred Evrard is also the co-founder of the R.E.D. (Recognize & Escape Danger) program and is a consultant for the French Ministry of Defense and several Law Enforcement and Special Forces units around the world both in Close Quarter Combat (CQC) and Counter-terrorism.

Fred Evrard did his military service as a paratrooper in the 9th RCP (Regiment of Chasseurs Parachute), and has since been a CQC and R.E.D. trainer for various units of law enforcement and military such as the Special Forces of the Philippines (FRU and SWAT), elite units of the Singapore Police (Security Command, Commando) and VIP Protection Units of Hong Kong and Singapore police forces (VIPPU) and several groups of special forces and elite units in France.

Fred is a 7th degree Black Belt instructor and owns the title of Punong Guro (Head Instructor & Founder of the style). In addition, he is an instructor in Parkour and an international speaker in the fields of personal development, nutrition and comparative religion studies.

2010: Certificate of recognition by the Special Reaction Unit of the Philippines National Police as a Tactical weapons and close-quarter combat Instructor (Manila, Philippines)

2009: Certificate of Recognition by the Philippines National Police Special Forces, as a Tactical Weapons and Close-Quarter-Combat Instructor (Baguio, Philippines)

2008: Certificate of Recognition by the “Fullcon” Council of Masters (Baguio, Philippines) 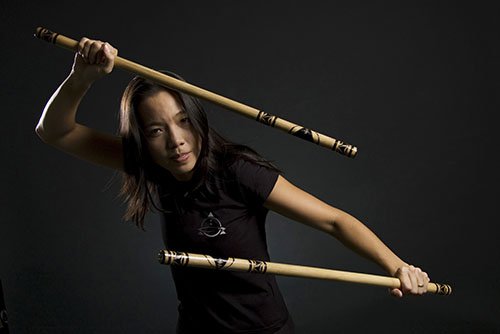 Lila Evrard is a professional Martial Arts instructor with 40 years of experience.

Lila was born in Tahiti in 1976 and started training in Martial Arts with her father at the age of 5. She is recognized internationally as one of the top female Martial Arts instructors in the world and in 2010, was awarded “Filipino Martial Arts Woman of the Year”. Lila also teaches Boxing, Kickboxing, Conditioning, Tai Chi and Tahitian Dance, and has a Master Degree in law. In year 2003, following a lifetime dedicated to the Martial Arts, Lila quit her job as a lawyer, and with her husband Fred, left their home in Tahiti for a 4-year-martial-arts-trip around the world.

4 years without going home, training all over the world with Masters of several Martial Arts and doctors of traditional medicines. They have visited and trained in China, Vietnam, Japan, Thailand, Singapore, Indonesia, Malaysia, Tibet, the Philippines, Lebanon, the USA, Hawaii, Tahiti, France, Germany, Italy, Spain, Canada, Norway, Sweden, Finland, New Zealand, and more; searching for knowledge and sharing it, teaching seminars all over the world.

Lila is the Co-founder of the Martial Arts style of Kali Majapahit. In 2006, Lila and Fred opened the KM Headquarters in Singapore, which now have branches all over the world. In addition, she is the co-founder, with her sister, of Tahitian Dance and Fitness program TDF (Tahiti Dance & Fitness).

Finally, Lila Evrard is also a speaker for TEDx Talks.